SCOTTSDALE, Ariz. – With snow blanketing the stadium at West Bloomfield High School, Donovan Edwards sat beneath a tent with five hats spread on the table in front of him.

Alabama. Georgia. Michigan. Notre Dame. Penn State. Those were the schools Edwards had among his finalists when he announced his commitment and signed his letter of intent on a frigid day in December 2020.

If Edwards’ goal was to star on a team in the College Football Playoff, Michigan wasn’t the obvious choice. Alabama, Georgia and Notre Dame all had established CFP credentials; Michigan, coming off of a 2-4 season, did not. The Wolverines also had a logjam at running back with Zach Charbonnet, Hassan Haskins and Blake Corum occupying the top three spots on the depth chart.

As a player who lives for big moments, Edwards had easier paths to the top. He chose Michigan, the path of greater resistance, because he wanted to be part of the revival.

Edwards’ status as a Michigan legend was born with two fourth-quarter touchdown runs against Ohio State. For most of the country, that was the moment Edwards arrived on the scene as one of college football’s burgeoning stars. For Michigan, it was the continuation of everything Edwards has been doing since he arrived on campus.

“I’d never doubt Donovan Edwards in any capacity to do anything,” coach Jim Harbaugh said.

Edwards is the main reason Michigan’s national championship hopes didn’t evaporate when Corum went down clutching his knee against Illinois. The Wolverines put a lot on Corum’s shoulders this season, routinely counting on him for 25 or 30 carries. Sidelined off and on by injuries, Edwards was more of a situational player, spelling Corum in short bursts or showing his skills as a receiver out of the backfield.

Losing a player as valuable as Corum would be game over for a lot of teams. For the Wolverines, it was an opportunity to unleash a player they’d kept largely under wraps. Edwards ran for 216 yards against the Buckeyes and 185 against Purdue in the Big Ten Championship Game, all while wearing a cast on his injured right hand. He will be one of the most important players on the field in Saturday’s Fiesta Bowl against TCU, and the same will be true in the CFP title game if Michigan advances.

At 5 feet 8, Corum is shifty and elusive. Edwards, a bigger back at 6-1 and 204 pounds, is a tough runner who’s at his best when he can put a foot in the ground and hit the accelerator. He has a top gear that allows him to pull away, as he showed on long touchdown runs against Ohio State, Penn State and Purdue.

Edwards has four runs of 60 yards or longer this year, tied with UAB’s DeWayne McBride for the most in the FBS. He did that on 117 carries, meaning 3.4 percent of his runs have gone for 60-plus, by far the highest percentage among comparable backs. Among running backs with at least 100 rushing attempts, Edwards also leads the FBS at 7.45 yards per carry.

“He’s brought his own style,” co-offensive coordinator Matt Weiss said. “He may not be able to do some of the things as well as Blake can, but he brought the home-run speed to break 70, 80-yard runs. He’s doing it in his own way.”

Edwards, who lost his mother to breast cancer when he was 2, is outspoken about his faith. He sees his football career as part of a bigger plan, which could explain why he believed in Michigan at a time when the program appeared to be foundering. 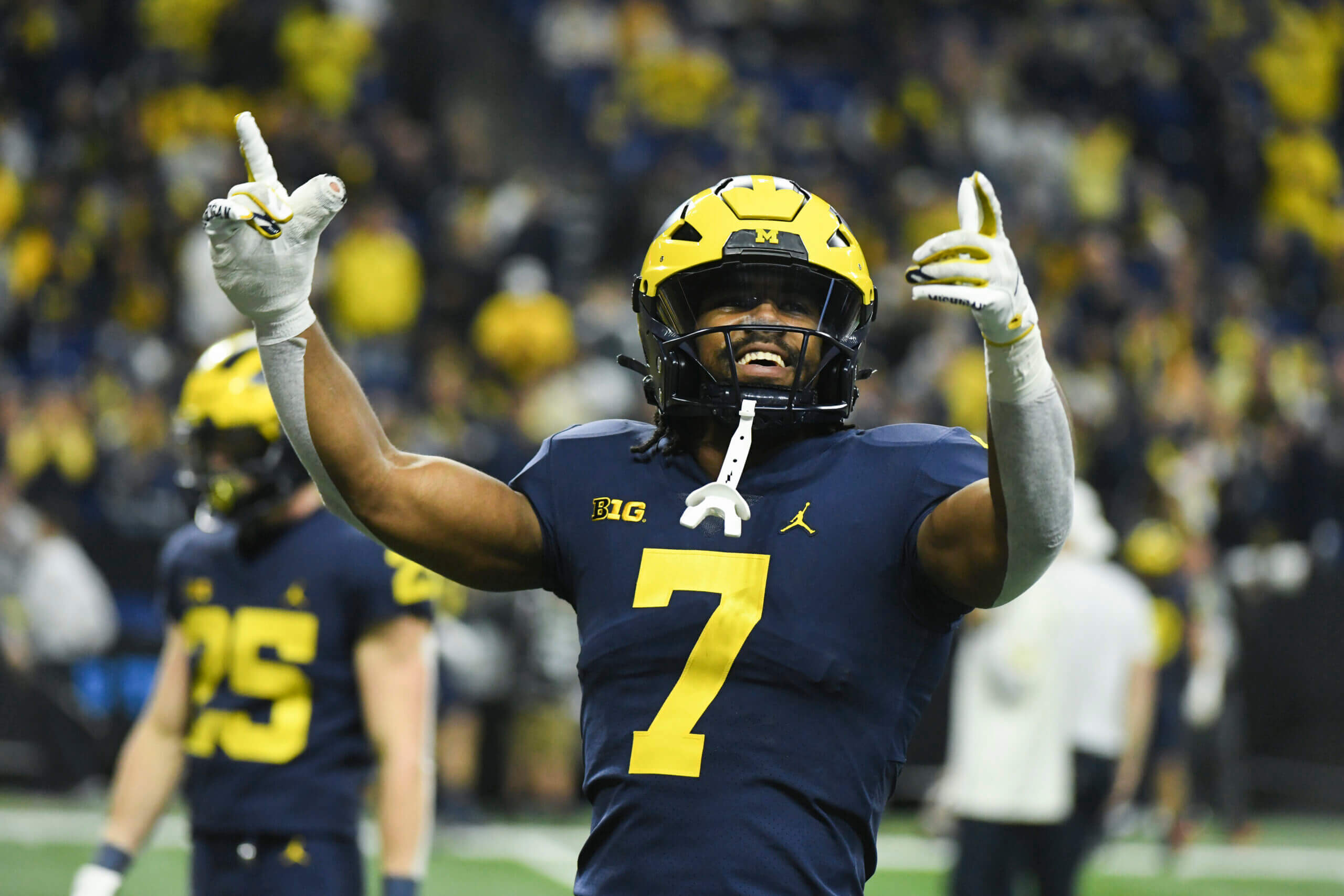 Last year, Edwards was the No. 3 running back on a team that won the Big Ten and lost to Georgia in the Orange Bowl. He was in line for a bigger role as a sophomore, but two injuries — one early in the season, one late — limited his touches.

A player with Edwards’ recruiting credentials would have been justified to want immediate playing time. Battling injuries while waiting behind Haskins and Corum forced him to be patient, but he didn’t lose faith.

“If you look at last year, he didn’t play at all, really,” running backs coach Mike Hart said. “We had Hassan and we had Blake. Donovan was a five-star recruit, a heralded recruit, and did not play that much. For him to come in as a freshman and not play a lot and stay here, not get in the portal and not do those things, shows a lot about who he is.”

From his time in high school at West Bloomfield, Edwards was known as a player who craves the bright lights. For a college football player, the lights don’t get much brighter than playing in the Fiesta Bowl with a trip to the CFP title game on the line.

Questions that might arise when a backup is thrust onto that stage don’t necessarily apply to Edwards. No one at Michigan wonders if he’s ready. No one is waiting to see how he’ll respond to the pressure. They know the answers.

“Big-time players do big-time things in big-time moments,” Edwards said. “My whole life has been preparing to do what I’m doing on a national stage at a high level.”

It’s hard to imagine a skill-position player in Michigan history who has accomplished more with fewer touches than Edwards. He set Michigan’s single-game record for receiving yards by a running back last year against Maryland, threw a 75-yard touchdown pass against Iowa in last year’s Big Ten Championship Game, plunged a dagger into the heart of Ohio State with his two touchdown runs and was named MVP of this year’s conference championship game.

If that’s not enough to make him a Michigan legend, Edwards knows what will.

“We’ve got to win a national championship,” he said. “That would make us legendary.”